*This is a rant. Beware. You ready for some straight up Jerry Springer shit?* 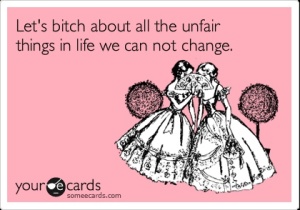 My husband’s alcoholic, drug addicted 41 year old ex-wife is “accidentally” 6 weeks pregnant. By a man she met 8 weeks ago, and has been living with for 6 weeks. We find this out while I’m literally in the stirrups getting my lining checked for my donor egg cycle. Fuck you, universe. FUCK YOU

This is the same woman who told her dad that she hopes his wife of 30 years dies horribly so he can know what pain feels like. The same women who took her 7-year-old child out of school on a Tues morning and took her on a bender that ended with my step-daughter in a sleazy hotel calling 911 and applying pressure to her mother’s head wound until the ambulance came (a bottle of 100 proof vodka after a day of drinking and a handful of Vicodin and Xanax will do that to you. But she “was stressed out” you guys. 3 days in ICU on the taxpayer’s dime – you’re welcome.). This is the same women who told her live-in-boyfriend that if he didn’t do (whatever it was) she would call the police and say he beat her, which she did and he was taken out of his office in hand-cuffs. The charges were dropped and later found to be fraudulent. The same women who hasn’t worked in 13 months because she says she has severe nerve damage in her neck, head, shoulder, arm and hand from her job as an esthetician (because “waxing is hard” you guys). She is currently under investigation for Workers Comp fraud. She was just evicted from her 2rd apartment and is being sued for back rent by her apartment building and by her roommate (whose rent and utility money she spent on a new boob job, face filler injections and her BMW). She and my step-daughter have lived in 12 places in less than 4 years, and as of Dec. 1 they will be homeless (again) because the guy she was living with this time (in a 1 bedroom, 800 sq ft apartment), the one that impregnated her, got kicked out. That’s when she decided to tell him she was pregnant. This is the 19th boyfriend (that we know of) who has been introduced to her current child, in less than 3 years. CPS has been called on her by teachers, 2 different boyfriends, her father and medical personnel, and she has been found guilty by CPS of 4 counts of severe child neglect and endangerment and 3 counts of mild to moderate child abuse, as well as educational neglect for my step-daughters chronic truancy (she was absent from 2nd grade 32% of the time, despite living <1 mi from her school and her mother not working). At our last custody hearing the judge said she would give her another chance, but she had to attend drug and alcohol abuse counseling, psychological counseling, anger management counseling and parenting classes, submit to random drugs tests and she wasn’t allowed to consume alcohol while with her child, or within 12 hours of being with her. AND SHE’S PREGNANT. AT 41.

And here’s me. 37. Psychologically stable and financially competent. Employed every day of my adult life. Masters Degree. Ph.D. Happily married in a stable and loving relationship. Non-smoker, non drug user, occasional drinker. Exercise regularly and a healthy lifestyle. Close with family, lots of friends. Never been arrested, never even had a speeding ticket. NOT PREGNANT.

I mean, come on, universe. I know that life isn’t fair, but this is ridiculous.

And, DH doesn’t get it. He and his mom were on the phone for an hour this morning talking about the crazy ex, her new pregnancy, the living situation… He missed almost all of my lining check because he was on the phone. I told him it upset me and he said “Why? Why does it matter what she does? It doesn’t affect us.” Well, it matters because you’re missing OUR lives to talk about HER life. It matters because what we’re going through is now overshadowed, once again, by her bad choices. I know it’s the mother of his child. That’s part of the reason it bothers me!!! This horrible, hateful, awful woman could give him a child and I can’t! And she didn’t/doesn’t love and cherish either one of them!! And now, after all I’ve done to get pregnant, after all of the tests and pills, and doctors, and bills, and shots and heartaches we still have no baby and SHE’S FUCKING PREGNANT!! If I get pregnant and she keeps the baby, the whole time I’m pregnant it’ll be all about her – what’s she going to do? Where will they live? Is she getting the proper care? Nutrition? Is she drinking? Drugging? Going to Dr. appointments? And if I’m being selfish I don’t care! I have put myself through hell to pregnant, and I don’t want my whole pregnancy (assuming the best) to be overshadowed by her bullshit! For once, I want it to be about me! I want to enjoy, with my husband and family, this time that I have worked so hard for!!

And since I am suddenly emotionally alone in this DE cycle I am going to turn to you guys with my happy news, in order to get a little cheering and support. My lining was perfect. 9 mm. It also had the triple stripe, although the doctor didn’t say that, but I could see it on the monitor. There was an intern in the room and he was explaining things to her and said “Here we go. Look at this – this is the perfect mid-cycle uterus. Perfect 9mm lining, excellent receptivity for implantation.” So, all of the shots and pills and Pom juice and kale and raspberries and fertility yoga have produced the perfect uterine lining. Finally. This is the first and only time I have ever received positive news in the stirrups. The only time my reproductive system has been average, much less excellent. So, yay me. Also our retrieval is tomorrow.

*sigh* Ok, I guess my pity party is over. I know I shouldn’t let it get to me so much, but COME ON! Am I being completely unreasonable, or does this suck as much as I think it does?

Top Posts of the Week